Enabling others to understand your personality has many positive effects, both in your business and in your personal life and enhances the relationships that you have with others.

Recently, I had the opportunity to help someone share their personality with a great positive outcome.

I was speaking at a conference on how to create and develop high-performing teams and attending, was a long-standing business connection of mine, who had been profiled, as part of some team-building, that I had facilitated with her and her colleagues.

After greeting each other, she said that she wanted to thank me for helping her to get a new job.  I asked her to explain more.

“Well, you know earlier in the year, you offered to create a Personality CV and you did one for me?”

“Well, I used the one that you created for me and sent it as part of my job application, as I was unable to share my full Clarity4D Profile at the application stage.

The employer was intrigued by it, so much so that they invited me for an interview, during which I was able to share my full profile with them and explain what it was all about.

That then led to me being able to expand upon it in terms of what I felt I could bring to the job and also my leadership style.  This resulted in me getting the job, so I just wanted to say thank you, as the colours really do work.”

I was absolutely delighted and thrilled that a simple idea had helped in such a big way and subsequently it led to me working with her and her team, facilitating team-building, using Clarity4D Profiles.

In this day and age, everyone has limited time it seems.  So, if you met someone new and you had a minute to introduce yourself and say a little about you and your personality, what would you tell them? Below is an idea that you might like to try.

1. Using the image below, read the words on each card.

2. Choose only ONE word from each card and write it down.

3. Now decide which word describes you most, strongest first down to least.

4. Now create a sentence that uses that word and captures your personality.

Good luck. Mine is below, as an example. 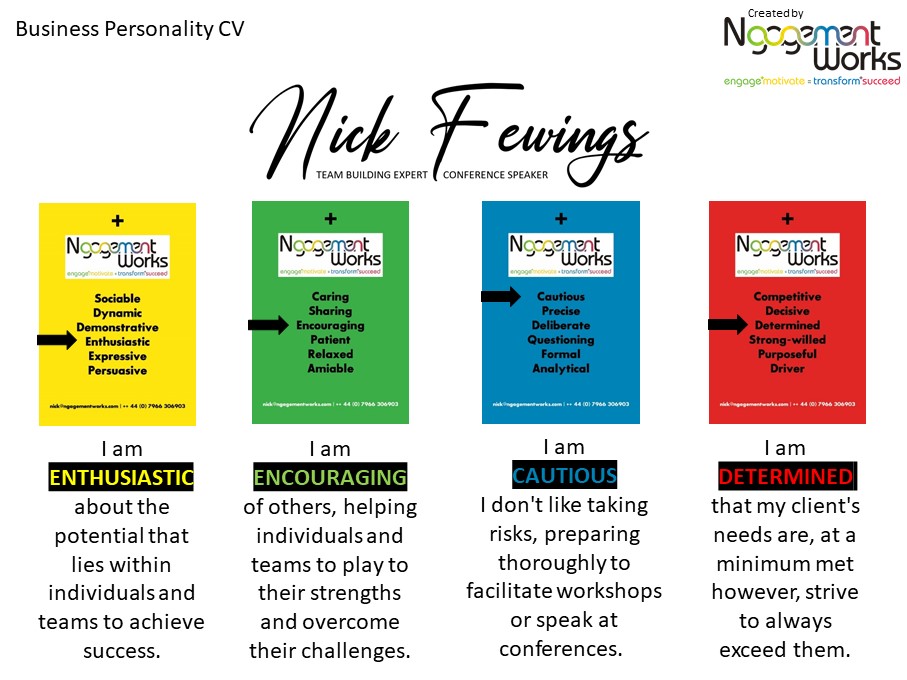 Would you like yours completed, with my compliments?  Simply email me with your words in order and one sentence, describing each.  My email is nick@ngagementworks.com

I look forward to hearing yours and remember, only ONE word from each card and IN ORDER of strongest preference word first to least.

Wishing you continued happiness and success in both work and life.